10 Things to Do During Everest Region Trek

Trekking in the Everest region is one of the most popular and heavily visited destinations in the world. This region offers much popular trekking like Everest Base Camp trek, Gokyo lakes trek, Everest Yoga trek, and many more adventurous trails. Trekking in the foothills of the world’s highest mountains, experiencing the most exciting adventure, and witnessing the fabulous snowy peaks around you are the main highlights of Everest region trekking. Embark on a once-in-a-lifetime journey to the foothills of the giant Himalayas including the highest mountain Everest, Lhotse, Makalu, and Cho Oyu.

A journey begins with a short and scenic flight to the world’s highest-altitude airport in Lukla and treks through the vibrant sherpa villages, lush green forest, and bank of the Dudhkoshi River until you reach Phakding/Manjo. Afterward, get inside the popular UNESCO Heritage Site, Sagarmatha National Park where you can get a chance to experience the diverse flora and fauna. The vibe of famous sherpa town Namche Bazaar would be the most exciting for trekkers where you get to see the first glimpse of Mt. Everest, Ama Dablam, Lhotse, Nuptse, and many more stunning peaks once you hike to Everest Viewpoint. Furthermore, you can participate in evening prayer sessions in Tengboche monastery, learning Tibetan Buddhism, Sherpa culture, and practices and hiking all the way to Everest Base Camp and Kalapatthar viewpoint and getting back from the same trail.

There are many other things to see and explore during the Everest region trekking. While trekking to Everest base camp and returning back to Luka, the trail will amaze you many times with stunning views, landscapes, culture, and people. In this blog, we tried to bring some of the must-experience things while trekking in the Everest region.

The first adventure starts with a 30min short scenic and dramatic flight from Kathmandu to the small airport in Lukla, Tenzing Hillary Airport at an elevation of 2,840m. The airport is considered one of the most extreme airports in the world because of its shortest runway, geographical position of the airport, and extreme weather conditions. The airport lies between the mountains and furthermore the airport is located on the slope of the mountains with an asphalt-paved runway of 527m long and 60 feet wide with a gradient of 12% from north to south. Another challenging aspect of Lukla airport is the weather factor which causes cancellation and flight delays many times. That’s why normally from Kathmandu, flights happen during the early morning only when the sky is clear. 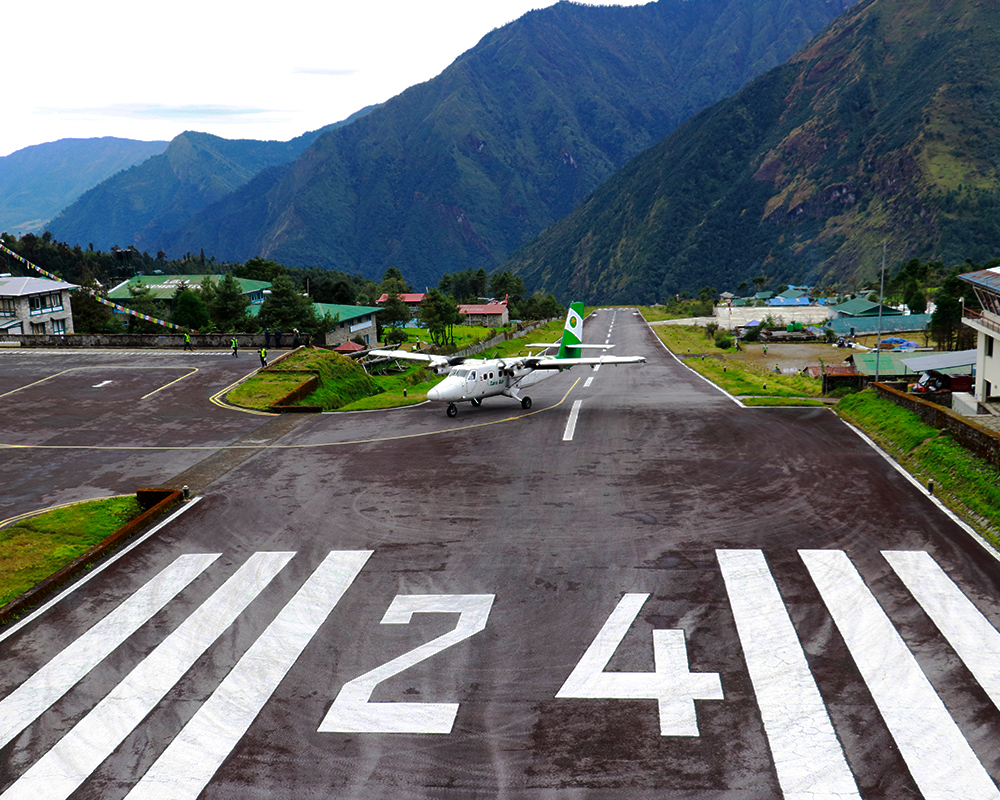 Namche Bazaar is one of the most popular towns in the heart of the Khumbu valley. A place nestled at the altitude of 3,440m shaped like a horseshoe and positioned in a very unconventional area of Khumbu valley. A sherpa town with a glorious history, stunning mountains views, valleys, landscapes, and sherpa culture and traditions. Many people often called it the tourism capital in Nepal and a favorite place for hikers, trekkers, and climbers for acclimatization. West of Namche offers a magical view of Kongde Ri and east offers another stunning view of Thamserku and Kusum Khangaru. Besides this, cozy streets, classy restaurants, bars, fancy lodges, hotels, and several bakeries along with trekking stores make this town more vibrant. Namche Bazaar, a gateway to the many high mountains and junction of many popular trekking routes, diverges. 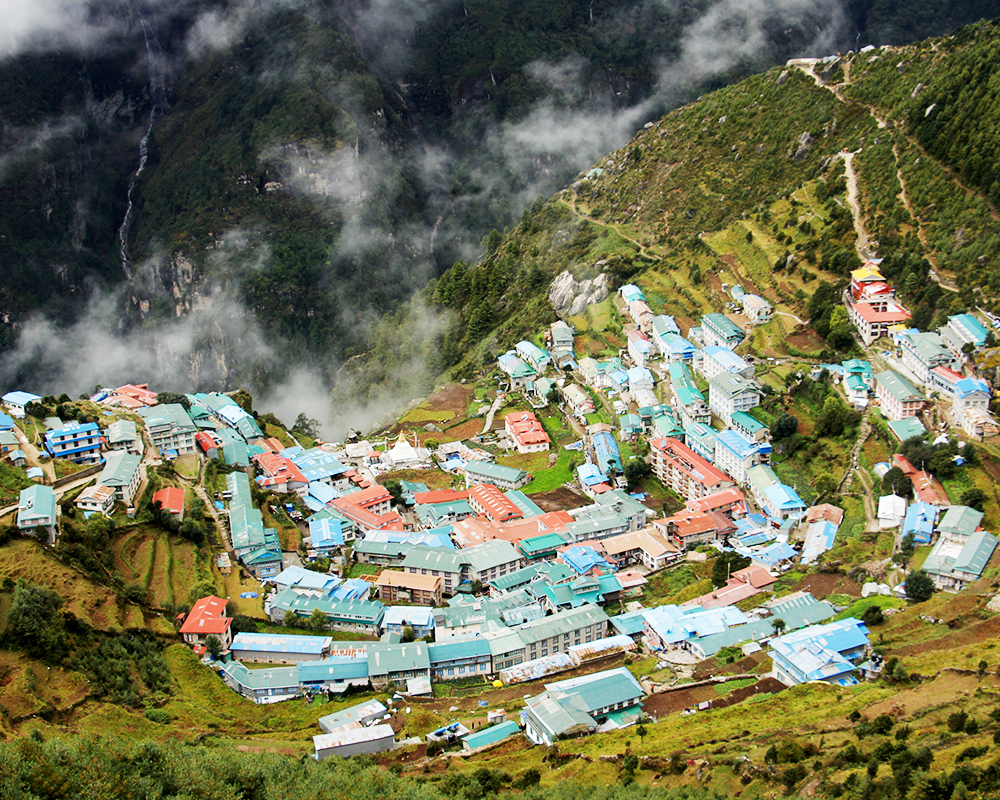 This is the place where you can experience the first glimpse of Mt. Everest along with Lhotse, Ama Dablam, and many other snowy peaks. A few hour hikes from the famous Namche Bazaar offers you the stunning Himalayan range, landscapes, valleys, and magical terrain. Everest View Hotel has also got the Guinness World Record of a star hotel in the highest altitude of the world. The hotel offers panoramic views of mountains along with Khumjung village. Khumjung is one of the biggest and oldest Sherpa villages in the Khumbu region. Hillary School, Hospital, and many cafes, bakeries, and guest houses welcome you always. You can see the small stupas, yaks, monasteries, Buddhist correspondence, and many more amazing things to explore in Khumjung valley.

Everest Region is full of Buddhist Gompas, monasteries, stupas, mani walls, prayers flags, and many correspondences related to Tibetian Buddhism. Among those, the Tengboche monastery is one of the most popular and biggest monasteries in the Everest region because of its ancient significance and unrivaled backdrops of Mt. Ama Dablam. Every October, this monastery hosts the famous Mani Rimdu festival, Buddhist celebrations with religious gatherings, musical performances, ritual dances in the presence of the incarnated Lama itself. 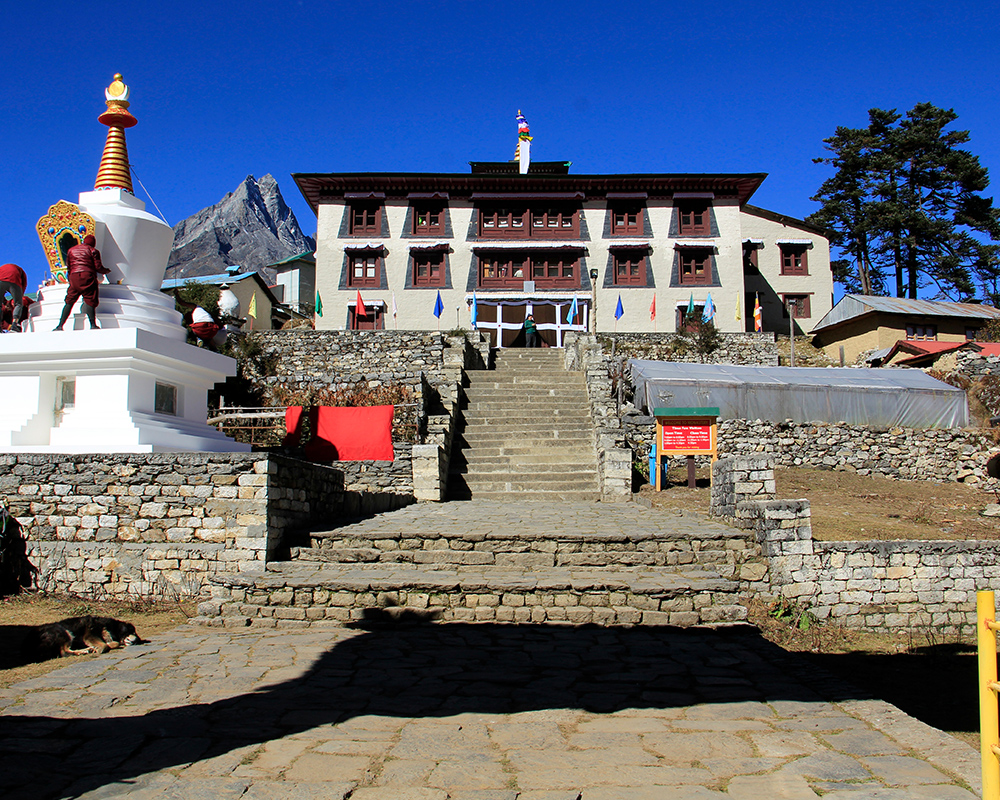 Normally mountains and Himalayas in Nepal are the motherland of Sherpa land. Everest Region is the home of Sherpa culture and Tibetan Buddhism. Sherpa people are the native of the Himalayas and they are popular for climbing and trekking. They have their own tradition, culture, and practices. Also, they believe in Tibetan Buddhism which is normally like taking the right turn of the stupas, mani wall, and monasteries which ultimately brings them good luck for the trekkers and hikers who pass through it.

Sagarmatha National Park is one of the prestigious and one and only national parks in Nepal listed in UNESCO World Heritage Site along with the highest national park in the world, ranging from 2,845m to 8,848.86m. It covers hundreds of mountains, rivers, peaks, valleys, glaciers along with rich biodiversity. Sagarmatha National Park is the habitat of many endangered species like snow leopard, red pandas, hornbills. Also, this National Park protects the Himalayan Tahr, Musk Deer, Himalayan Monal, Tibetan Snowcock, Blood Red Pleasant and many more beautiful creatures. This national park is well preserved and one of the most beautiful parts of the Everest region. 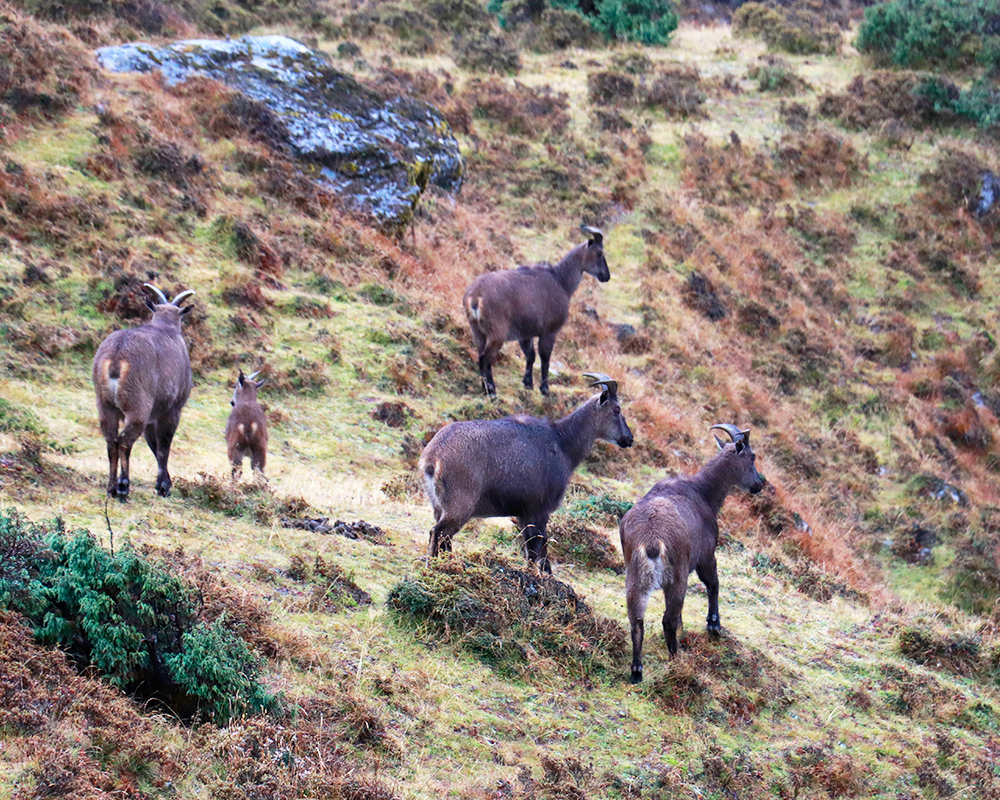 Exploration of Everest Base Camp

Everest Base Camp lies at an elevation of 5,364m in the middle of the Khumbu valley and is one of the best attractions of the Everest region. Also, this is a popular trekking trail around the globe as you can see thousands of people visit this trail every year from different parts of the world. The base camp lies at the foothills of the world’s highest mountain, Mt. Everest, and this is the dream destination of most adventure seekers and travel enthusiasts. Roaring around the base camp, writing your names in the stones, taking pictures with the glaciers, and surviving in that altitude with think oxygen is the most adventurous feeling one can do in their lifetime.

While trekking in the Everest region, Kalapatthar 95,545m) and Gokyo Ri (5,357m) is the must-visit place for the panoramic mountains view. From both viewpoints, you can see the world’s highest mountains like Mt. Everest, Lhotse, Makalu, Cho Oyu, Nuptse, and many more stunning snowy peaks. Besides this, you can see Khumbu icefall, Khumbu glacier, and Gorakshep village from Kalapatthar viewpoint whereas, the Ngozumpa glacier, Gokyo lakes, and Gokyo valley can be seen from Gokyo Ri. Exploring such vantage points makes all the Everest region treks more stunning and worthy.

Besides mountains, Gokyo lakes are another best thing to explore during your Everest region trek. Gokyo lakes are the world’s highest freshwater lake system located in Gokyo valley, consisting mainly of six glacial lakes. They are Gokyo Cho, Thonak Cho, Gyazumpa Cho, Tanjung Cho, Ngojumpa Cho and Kyajumba Cho. The Thonak (4th lake) is the biggest among the lake system. There are tea houses near the 4th lakes and you can experience the soaring sound of freshwater, a reflection of snowy peaks, and blur-colored lakes from here. During winter, you can see the frozen lake where you can walk and skate as well. Gokyo valley along with Gokyo lakes is the most picturesque palace in the Everest region. 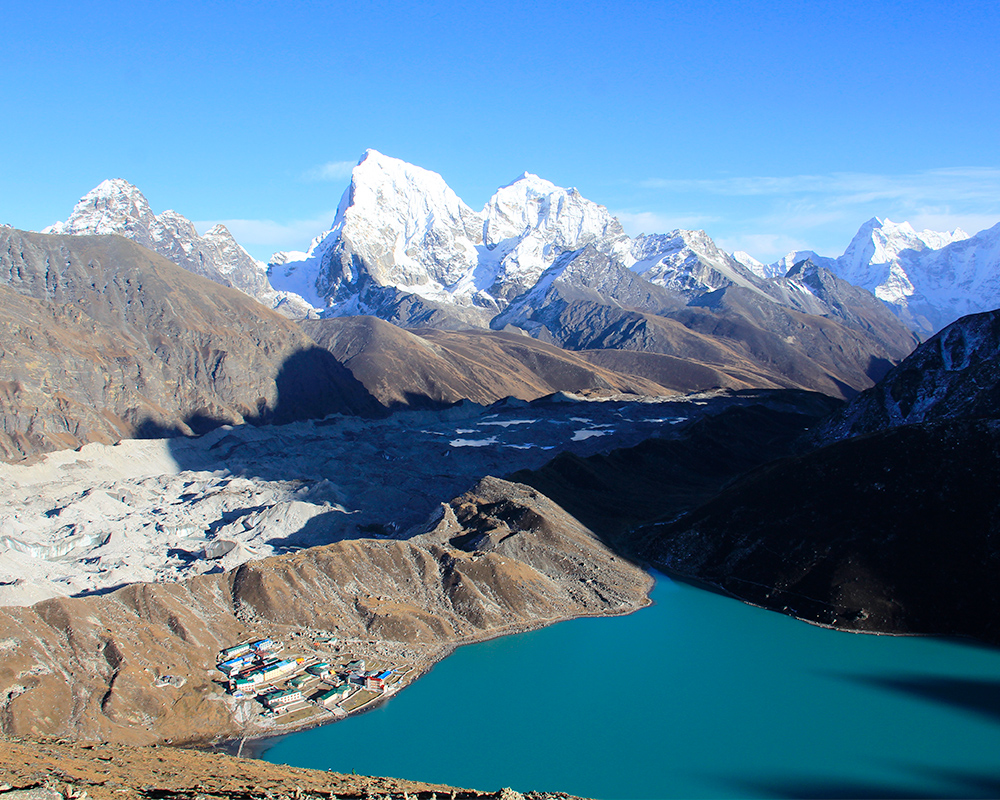 If you want to experience the ultimate adventure in the Everest region, the three-pass trek would be the perfect itinerary for you. Crossing three difficult passes, getting to two different viewpoints, and yes ultimately Everest Base camp in a single trek would be the lifetime adventure ever. You can start your trek from Renjola pass and reach Gokyo valley. Afterward, you hike to Gokyo Ri and continue towards the Khumbu region crossing Cho-La pass and reaching Everest Base camp along with Kalapatthar summit before leaving for Kongma La pass. Almost three weeks long trek, more than 200km distance and 7 destinations above 5,000m altitude in a single trail.

Besides these things, the things we must do while trekking in the Everest region is to keep the area clean, do not disturb any wildlife, and do not harm the wildness and harmony of the ecosystem there. Respect the culture and religion of the Sherpa people and enjoy the most admirable journey of your lifetime. For more details regarding the trekking and tour packages in the Everest region, feel free to contact us anytime. 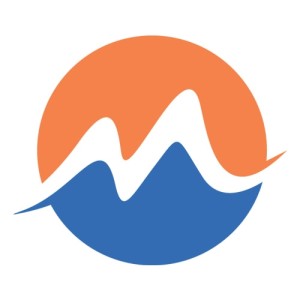