The Pokhara Skydive Package is a nine-day tour, that includes 3-2 Solo/Tandem Jumps,  accommodation, sightseeing tours, and air and surface transfers (Kathmandu – Pokhara), plus rafting on the challenging rapids of the Trishuli River. Entries are open for solo as well as tandem jump. If you want the thrill of the event but don’t want to experience solo skydiving or you have friends or family members joining you, we offer a ‘Holiday Package’ that includes one Tandem Jump and one Tandem Paragliding within the same Boogie Package. An optional half-an-hour Microlight Flight is also open for those who do not like skydiving.

Following the success of the World’s Highest Skydiving adventure – Everest Skydive, we now offer an exclusive skydiving adventure in Pokhara as well.  Pokhara, situated about 124 miles (200 kilometers) west of Kathmandu, is truly a city of sensation and serenity. Flanked by panoramic Himalayan peaks of Annapurna, Manaslu, Dhaulagiri, and Machhapuchhre, and adorned by emerald lakes; Pokhara, apart from being an unmistakable beauty of the Himalaya, is also an adventure hub of Nepal. This elegant and adventurous city is now touching new heights with yet another edition of Himalayan Skydive – Pokhara Skydive, a sublime adventure you don’t want to miss while in Nepal.

Backed up by the expert Everest Skydive Crew, Pokhara Skydive started its commercial operation in 2013. Held every autumn at Pame Lauruk dropzone, 11km north of Phewa Lake amidst huge fun and excitement, this adventure is getting increasingly popular every year. In 2019 (19th – 24th November) alone, we had a total of 147 jumpers from around the world. It is rightly said that skydiving is not just about the adrenaline rush, it’s also about the View that people can only dream to see.  Pokhara Skydive rightly justifies it! Leaping from a height of 11000-13000 ft from AS 350 B3/B2 Helicopter, with the majestic Himalaya around you and the serene valley of Pokhara sprawling below is indeed a feast to your soul. However, the fun doesn’t end here. Your entire jump will be captured on film by our camera flyer so that you can relive your moments again and again. We have the option of both Package and Individual Jumps. So, why wait – Pokhara Skydive is all set to make your dream a reality! 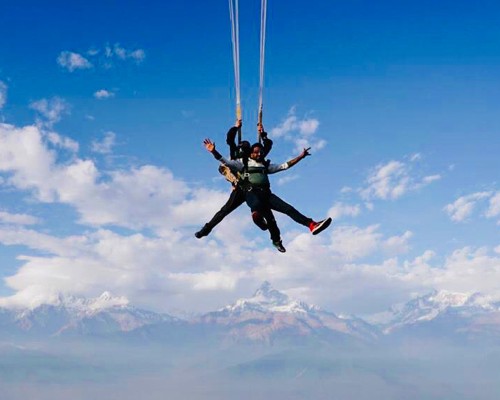 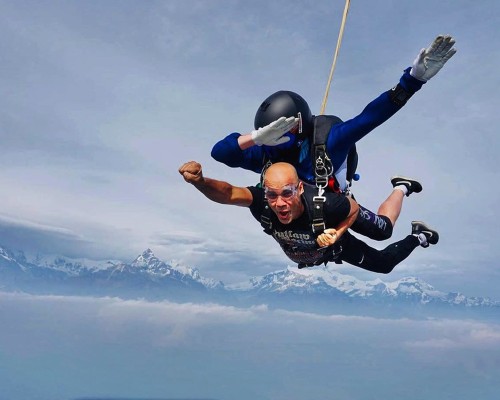 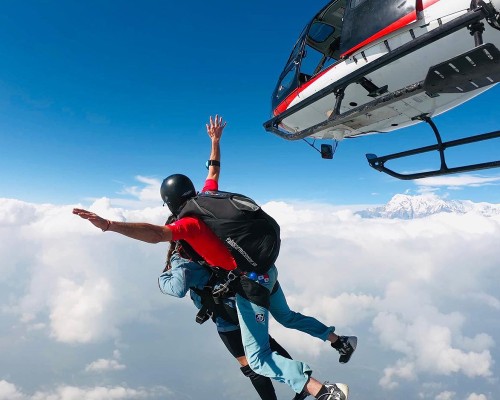 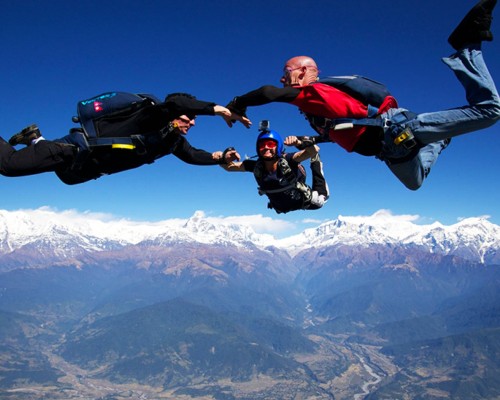 You will be welcomed by the Himalayan Shangrila before you land in Kathmandu. Once you land and finish your immigration formalities, you will be received by our representatives and escort you to your hotel.

Kathmandu, the historical and cultural core of Nepal, has been a popular destination for tourists ever since Nepal opened its doors to visitors. The city presents a wonderful mix of Hinduism, Tibetan Buddhism and western influence.There will be a guided tour to the UNESCO World heritage Sites of Boudhanath -the largest Buddhist Stupa in Nepal, Pashupatinath – the largest Hindu shrine in Nepal dedicated to Lord Shiva, and to the medieval palace of the Malla dynasty at Patan or Lalitpur, the ‘City of Artisans’..

We take an early drive to Kurintar, which will last for about 4 hours. Under the guidance of a river guide, we venture into the Trishuli river and raft along the exciting rapids (rafting past Twin Rock, Ladies Delight and Scout Upset can be a mind-blowing experience). This river journey is found to be electrifying and one of the best ways to explore Nepal. During this meticulously organized river trip, we journey through some of the unexplored landscapes, cultural heritages and bio-diversity of Nepal. After the day’s adventure, we drive to Pokhara..

Pokhara is one of the most favored destinations in Nepal. We enjoy boating at the Phewa Lake, visit Davis Falls, Mahendra Gupha (cave), International Mountain Museum and the Tibetan Refugee Camp. In the afternoon we attend the drop zone familiarization and Skydive briefing..

After the day’s final jumps, you will be driven to the airport for your flight to Kathmandu. The flight takes about 30 minutes. You can utilize your free time in Kathmandu by just strolling down the streets, doing some shopping or enjoying the dusky light of the evening from your hotel..

Our support team will take you to the airport for your flight back home. Or you can stay longer for more exploration activities such as game drive at National parks, trekking, Tibet tours, mountain biking etc. You never know what Nepal has to offer you..

The given itinerary of the standard itinerary for the Pokhara Skydiving in Nepal. If you are looking for the customized and want to customize in your own requirements, please contact us anytime.